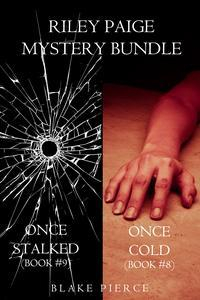 RILEY PAIGE MYSTERY BUNDLE: ONCE COLD (#8) AND ONCE STALKED (#9)

A bundle of books #8 (ONCE COLD) and #9 (ONCE STALKED) in Blake Pierce’s Riley Paige Mystery series—which begins with ONCE GONE, a #1 bestseller with over 900 five star reviews—and a free download! This bundle offers books #8 and #9 in one convenient file, with over 130,000 words of reading. In ONCE COLD, there is one cold case that has plagued Special Agent Riley Paige for her entire career, dwelling at the corners of her consciousness, forcing her to return to it again and again. The only case she has never solved, she has finally put it out of her mind. Until she gets a call from the murdered victim’s mother. It spurs Riley to face the case once again, and to not give up until she has found answers. Yet Riley barely has time to catch her breath when she receives a lead for another cold case, one which, if possible, strikes an even deeper note within her. It is a lead that promises to solve the case of her own mother’s killer. In ONCE STALKED, when two soldiers are found dead on a huge military base in California, apparently killed by gunshot, military investigators are stumped. Who is killing its soldiers, inside the secure confines of its own base? And why? The FBI is called in, and Riley Paige is summoned to take the lead. As Riley finds herself immersed in the military culture, she is amazed to realize that serial killers can strike even here, in the midst of the most secure location on earth. She finds herself in a frantic cat and mouse chase, racing to decode the killer’s psychology. Yet she soon discovers she is up against a highly-trained killer, one that may, even for her, be too deadly an opponent. Dark psychological thrillers with heart-pounding suspense, the Riley Paige mysteries are a riveting new series—with a beloved new character—that will leave you turning pages late into the night.