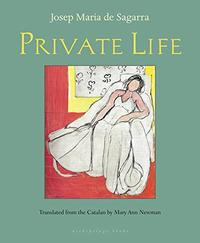 Private Life holds up a mirror to the moral corruption in the interstices of the Barcelona high society Sagarra was born into. Boudoirs of demimonde tramps, card games dilapidating the fortunes of milquetoast aristocrats - and how they scheme to conceal them - fading manors of selfish scions, and back rooms provided by social-climbing seamstresses are portrayed in vivid, sordid, and literary detail. The novel, practically a roman-à-clef for its contemporaries, was a scandal in 1932. The 1960's edition was bowdlerized by Franco's censors. Part Lampedusa, part Genet, this translation will bring an essential piece of 20th-century European literature to the English-speaking public.