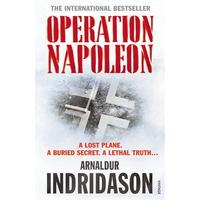 1945: a lost German bomber crashes on the Vatnajökull glacier in Iceland. Inexplicably, in the midst of World War Two, there are both German and American officers on board. One of the senior German officers sets off, a briefcase handcuffed to his wrist, never to be seen again. 1999, the US Army is secretively trying to remove an aeroplane from the Vatnajökull glacier. Two young Icelanders become involved but end up paying with their lives. Before they are captured, one of the two contacts his sister, Kristin. Her quest to discover his fate takes her on a long and hazardous journey in search of the key to the riddle about Operation Napoleon. WINNER OF THE CRIME WRITERS' ASSOCIATION GOLD DAGGER.