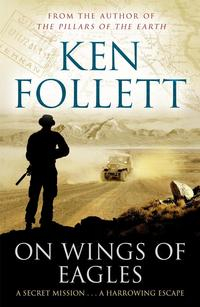 ON WINGS OF EAGLES

Sinopsis de ON WINGS OF EAGLES

A thrilling story of fact and fiction from Ken Follett, master of suspense. When Ross Perot, millionaire head of the Dallas-based company EDS, discovered that two of his key men had been jailed in Iran, he turned to the one person who could help. Colonel 'Bull' Simons, famed World War II and Vietnam commando, agreed to do what the US government would not - go in and get the men out. On Wings of Eagles is the gripping account of an incredible real-life rescue carried out by a Green Beret colonel and a group of corporate executives who were hastily trained to form a fighting team. In this extraordinary story Ken Follett weaves together a secret penetration of a highly dangerous territory, a dramatic jailbreak, and a harrowing overland escape to the Turkish border - made all the more extraordinary by the fact that it is true.

When a rescue operation is financed by a billionaire, willing to do anything and with a strong love for the country and his fellow citizens, it is led by a military expert (although retired), and carried out by a group of ex-combatants from Vietnam, with, in addition, university preparation and computer skills. What can go wrong? Well, everything ... and it is only solved by the intervention of Divine Providence (actually a series of causalities, which can, if you want to be considered fortuitous.) And of a determined Iranian with the gift of conviction, more self-confidence than bravery, and eager to emigrate to the United States. This is what Ken Follet offers through testimonial narrative, in this true story, nuanced by the recognized ability of his pen. A true story, in full change of Iranian regime, from the despotic administration of the Shah, to the outrageous of Khomeini. The imprisonment of two executives of a company owned by Ross Perrot (American billionaire, twice a presidential candidate) and a stratospheric rescue request, related by the devilish Dadgar, a totipotential official, as well as the son of the underworld, are reported. decides to prepare an alternative rescue plan, led by "the bull" Simmons, who was thrown, but was not accurate, had two unsuccessful rescue missions to his credit, that is, returning with full equipment after performing left and right killings but without hostages (in Vietnam) here the attempt is so unsuccessful that not a bullet is fired from the American side, although a significant amount of dollars, which is what they are for ... to be spent, but not in ransoms. That if. How many laws exist (on both sides) and still others that have not been invented, for the sake of justice and freedom ... of Americans. Final accounting, the Middle East 0 United States 1. (using an own goal and offside ) Story saved by The Pen, the prose, the narrative, the genius of Ken Follet, and Rashid's brazen indifference.