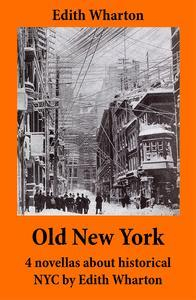 This carefully crafted ebook: "Old New York: 4 novellas about historical NYC by Edith Wharton (False Dawn + The Old Maid + The Spark + New Year's Day)" is formatted for your eReader with a functional and detailed table of contents. Old New York (1924) is a collection of four novellas by Edith Wharton, revolving around upper-class New York City society in the 1840s, 1850s, 1860s, and 1870s. The novellas reveal the tribal codes and customs that ruled society, portrayed with the keen style that is uniquely Edith Wharton's. Originally published in 1924 and long out of print, these tales are vintage Wharton, dealing boldly with such themes as infidelity, illegitimacy, jealousy, the class system, and the condition of women in society Included in this remarkable quartet are False Dawn, The Old Maid, The Spark, and New Year's Day. The decades indicated in the subtitles to the stories make them prequels, after a fashion, to The Age of Innocence. All five might as well be cut from the same bolt of cloth, sharing settings, characters, social insight, a similar knowing eye for a telling detail. Edith Wharton (1862-1937) was a Pulitzer Prize-winning American novelist, short story writer, and designer. She became known for her psychological examination of characters faced with changes in the moral and social values of middle-class and upper-class society. Her novels and short stories provide numerous expert characterizations of complex men and women.