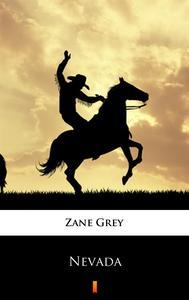 First published in 1926 and 1927, „Nevada”, the suspenseful sequel to „Forlorn River”, continues to be one of Zane Grey’s most beloved novels. Four years after Nevada had killed three men to clear his friend’s name, Ben and Nevada are reunited, but fate again plays a mean trick, and Nevada becomes Jim Lacy again – killer, thief, rustler, and notorious gunman – in order to save Ben from financial ruin. In Nevada, another romantic couple comes along, Marvie Blaine, and the daughter of backwoods rustlers, Rose Hatt. The primary action of this novel is in Arizona, where the forces of good and evil clash as honest ranchers are threatened by pernicious rustlers. All conflicts are resolved, and loving-kindness breaks out at the end of the novel – after the gunfight.