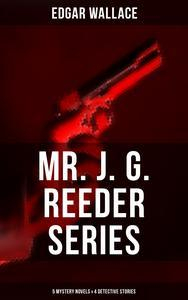 This carefully edited collection has been designed and formatted to the highest digital standards and adjusted for readability on all devices. Mr. J. G. Reeder Series is a collection of novels and short stories about a former police officer working for the Director of Public Prosecutions. The stories have been adapted for film, television and radio. Edgar Wallace (1875 - 1932) was an English writer. As well as journalism, Wallace wrote screen plays, poetry, historical non-fiction, 18 stage plays, 957 short stories and over 170 novels, 12 in 1929 alone. More than 160 films have been made of Wallace's work. Table of Contents: Room 13 The Mind of Mr. J. G. Reeder Terror Keep Red Aces Kennedy the Con Man The Case of Joe Attymar The Guv'nor The Shadow Man The Treasure House