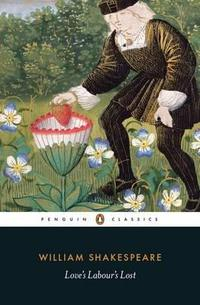 William Shakespeare's comedy Love's Labours Lost is edited with an introduction by John Kerrigan in Penguin Shakespeare. "What fool is not so wise to lose an oath to win a paradise?" Ferdinand, King of Navarre and his lords Berowne, Dumaine, and Longaville agree to form an austere academy, taking a solemn to have no contact with women for three years. But when the Princess of neighbouring France arrives with her female attendants, their pledge is quickly placed under strain. Soon all are smitten and confusion abounds, as each struggles to secretly declare his love in this comedy of deception, desire and mistaken identity. This book contains a general introduction to Shakespeare's life and Elizabethan theatre, a separate introduction to Love's Labours Lost, a chronology, suggestions for further reading, an essay discussing performance options on both stage and screen, and a commentary. If you enjoyed Love's Labours Lost, you might like The Merry Wives of Windsor, also available in Penguin Shakespeare."The most beautiful of Shakespeare's comedies." (Kenneth Branagh).