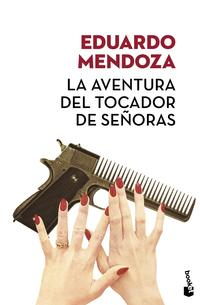 In this third installment, our nameless friend is freed from the lunatic asylum into a much changed Barcelona. It is the late nineties,speculation and money deals are running high. Formerly seedy neighborhoods have been polished by investment with a veneer of respectability. The protagonist is determined to lead a decent life as a hairdresser. But his plans will be derailed in a hurry when a series of unsavory characters involve him in a murder and he is framed as the main suspect. Yet again, his instincts and gift of gab will be the only reliable weapons in his arsenal. I am not sure why a good writer like Eduardo Mendoza has to rely so much on bad plotlines and excessive bombast. His idea of humor involves too much slapstick,hyperbole, a crowded cast and very unlikely scenarios. It is hard to care too much for a character that finds gullible enemies and helpful low-lives at every turn. Mr Mendoza also relies too much on long lists of adjectives for description and, with rare exceptions, doesn't build enough momentum for his liberal use of sarcasm. The best parts of this book are actually the ones where the plot doesn't advance and the author lingers on dialogue or situational description.