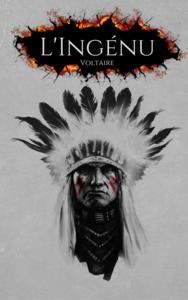 L'Ingénu (French: [lɛ̃ʒeny]) is a satirical novella by the French writer Voltaire, published in 1767. It tells the story of a Huron called "Child of Nature" who, after having crossed the Atlantic to England, crosses into Brittany, France in the 1690s. Upon arrival, a prior notices depictions of his brother and sister-in-law, whom they deduce to be the Huron's parents - making him French. Having grown up outside of European culture, he sees the world in a more 'natural' way, causing him to interpret things directly, unaware of what is customary, leading to comic misinterpretations. After reading the Bible, he feels he should be circumcised and calls upon a surgeon to perform the operation (which is stopped through the intervention of his 'family'). After his first confession, he tries to force the priest to confess as well - interpreting a biblical verse to mean confessions must be made mutually and not exempting the clergy. Not expecting to be baptized in a church, they find the Child of Nature waiting in a stream, as baptisms are depicted in the Bible. The story satirizes religious doctrine, government corruption, and the folly and injustices of French society (including its practices which conflict with actual scripture).