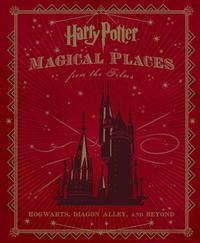 Hogwarts Castle and its many classrooms and dormitories, The Burrow, the Ministry of Magic, and Diagon Alleythese are just a few of the magical places that were brought to life for the blockbuster Harry Potter film series. Together, they make up the backbone of J.K. Rowlings wizarding world. This beautifully designed coffee-table book grants a complete and unprecedented look at the process of adapting the fantastic locations of the Potter world for the beloved film series. Detailed profiles of each environment pair never-before-seen concept art, behind-the-scenes photographs, and film stills with supplementary text highlighting filmmaking secrets from the Warner Brothers archives. Including the real locations that were scouted throughout the English, Welsh, and Scottish contrysides, as well as the imaginative and elaborate sets that were designed, built, furnished, and digitally enhanced specifically for the films, this delightful book takes readers on a visual journey through the Harry Potter world.