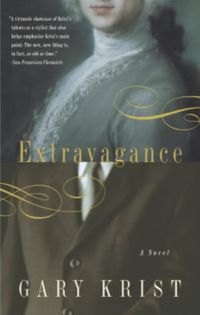 William Tobias Merrick, an energetic young man from the provinces, travels to the big city in a time of great optimism and ferment, hoping to make his mark on a frenzied, money-crazed society obsessed with the promise of new technologies. The city in question is London in the 1690s; but it is also New York in the 1990s. The new technologies are diving bells, pneumatic winches, and "sucking-worm" drainage engines; but they are also wireless telecommunication devices, patented biotechnology processes, and revolutionary electronic Internet routers. Only the sense of unlimited possibility remains the same throughout. Unfolding simultaneously in two distant--but remarkably similar--periods of history, Extravagance is a comic, pictaresque novel of financial mania, the story of a world gripped by a terminal case of irrational exuberance. Navigating the perils of both eras is a single cast of characters: Will himself, a young man on the make, eager to do whatever it takes to make his fortune; Will's uncle (and sponsor) Gilbert Hawking, a shrewd businessman with one foot in the Old Economy and one in the New; Benjamin Fletcher, the developer of a pioneering new technology destined to set the world on fire; and Theodore Witherspoon, the cheerfully unscrupulous wizard of the financial markets who promises to make them all wealthy beyond their dreams. Meanwhile, Will's aspirations are complicated by his pursuit of Ben Fletcher's sister, Eliza, the gorgeous and disconcertingly aggressive woman who is as desirable as she is elusive. Can Will succeed in his efforts to win both Eliza and the fortune that her brother's new technology seems likely to bring him? And can he make it all happen before the general euphoria of the age reaches its inevitable climax? Extravagance is a uniquely conceived work of high comic entertainment -- an ultra-smart time machine of a novel that proves that both love and greed are timeless.