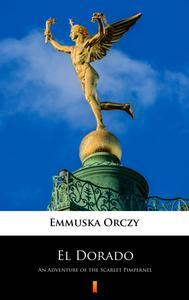 An Adventure of the Scarlet Pimpernel is a sequel to The Scarlet Pimpernel. In Eldorado, Sir Percy becomes involved in one of the most famous plots of the French Revolution, the attempt to rescue the child heir (son of Louis XVI and Marie Antoinette) to the French throne from imprisonment in Paris and spirits him away to Holland. He willingly walks into an ambush in an attempt to rescue his brother-in-law. When a certain member of the League (who also happens to be related to our hero) falls in love with a French actress, Percy is caught by archenemy hauvelin. His ultimate fate is one of the unknowns of history, though it is almost certain that he died in prison. The main character in reality in the various plots which centred around him was the Austrian-financed agitator, the Baron de Batz.