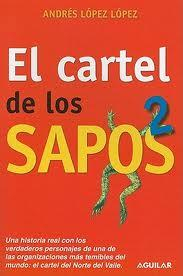 The film version of El Cartel de los Sapos opening May 2011 and starring Manolo Cardona and Tom Sizemore, presents the inside story of Colombia's drug world as told by Carmelo, a key player in the Norte del Valle Cartel. As the son of a hired gunman, Carmelo grew up to become chief of security for Diego Montoya, head of the notorious Norte del Valle Cartel. The key position he played within the extradited drug lord's organization allowed him to be a privileged witness and leading player in the war that consumed the cartel. The book walks the reader through each and every aspect of Montoya's drug empire, from the workings of the dangerous "kitchens," (drug labs) reconnaissance missions for new drug routes to evade the authorities, and the shocking links to members of Colombia's Fuerza P blica as well as renowned politicians.