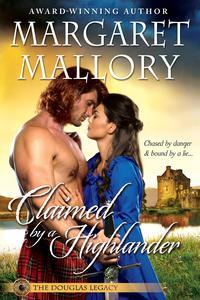 CLAIMED BY A HIGHLANDER

THE DOUGLAS LEGACY CLAIMED BY A HIGHLANDER Lady Sybil Douglas’s fall from court favorite to royal enemy is swift after her brothers are charged with treason and flee Scotland. When a huge Highland warrior appears claiming they are bound by a marriage contract, she’s desperate enough to ride off with him. She’ll worry later about how to escape the wedding. The last thing Rory MacKenzie needs is a pampered Lowlander wife. He traveled to Edinburgh in the hope of dissolving the ill-begotten marriage contract. But now that the Douglas men have abandoned his would-be bride, he’s honor-bound to protect her. Sybil and Rory fight scorching passion on their perilous journey to the MacKenzie castle, where murder and intrigue await. When everything is at risk, will they rely on each other and claim their unexpected love before it’s too late?