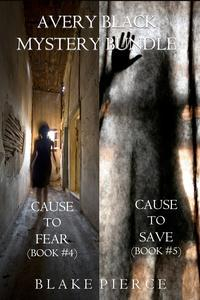 “A dynamic story line that grips from the first chapter and doesn't let go.” --Midwest Book Review, Diane Donovan (regarding Once Gone) From #1 bestselling mystery author Blake Pierce comes a new masterpiece of psychological suspense. A bundle of books #4 (CAUSE TO FEAR) and #5 (CAUSE TO SAVE) in Blake Pierce’s Avery Black Mystery series! This bundle offers books four and five in one convenient file, with over 120,000 words of reading. In CAUSE TO FEAR, when a body turns up floating beneath the frozen Charles River, the Boston Police summons its most brilliant and controversial homicide detective—Avery Black—to close the case. It doesn’t take Avery long, however, to realize that this is no isolated murder: it is the work of a serial killer. Other bodies begin to turn up, all of them sharing one thing in common: all are trapped in ice. Is it all a coincidence—or the signature of a particularly deranged killer? As the media converges and Avery suffers pressure from her bosses, she struggles to crack the inexplicable case, too bizarre even for her brilliant mind. At the same time she tries to keep her own depression at bay, as her personal life spirals to a new low. And she does it all while trying to enter the mind of a psychotic and elusive killer. In CAUSE TO SAVE, the epic finale of the Avery Black series, serial killer Howard Randall has escaped, and the entire city of Boston is on edge. Women are turning up gruesomely murdered, and everyone suspects Howard is at it again. When Boston’s most brilliant and controversial homicide detective—Avery Black—is herself stalked—and when people close to her are brutally killed, one by one—it seems the city’s worst fears are confirmed. But Avery is not so sure. The murders remind her of something she once saw in her past. They remind her of something too close to her heart—something that had to do with a secret she thought she had buried long ago…. Dark psychological thrillers with heart-pounding suspense, the AVERY BLACK MYSTERY series is a riveting new series—with a beloved new character—that will leave you turning pages late into the night.

0 reseñas sobre el libro AVERY BLACK MYSTERY BUNDLE: CAUSE TO FEAR (#4) AND CAUSE TO SAVE (#5)