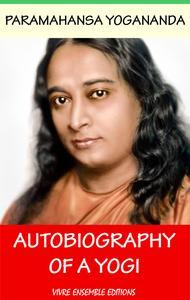 AUTOBIOGRAPHY OF A YOGI

Complete edition of "Autobiography of a Yogi -  Paramahansa Yogananda", with table of contents Autobiography of a Yogi is the most popular among Yogananda's books. According to Philip Goldberg, who wrote American Veda, "the Self-Realization Fellowship which represents Yogananda's Legacy, is justified in using the slogan, "The Book that Changed the Lives of Millions." It has sold more than four million copies and counting". Autobiography of a Yogi describes Yogananda's spiritual search for enlightenment, in addition to encounters with notable spiritual figures such as Therese Neumann, Anandamayi Ma, Vishuddhananda Paramahansa, Mohandas Gandhi, Nobel laureate in literature Rabindranath Tagore, noted plant scientist Luther Burbank (the book is 'Dedicated to the Memory of Luther Burbank, An American Saint'), famous Indian scientist Sir Jagadish Chandra Bose and Nobel laureate in physics Sir C. V. Raman. One notable chapter of this book is "The Law of Miracles", where he gives scientific explanations for seemingly miraculous feats. He writes: "the word 'impossible' is becoming less prominent in man's vocabulary." The Autobiography has been an inspiration for many people including Steve Jobs (1955–2011), co-founder, former chairman, and chief executive officer of Apple Inc. In the book Steve Jobs: A Biography the author writes that in preparation for a trip, Mr. Jobs downloaded onto his iPad, the Autobiography of a Yogi, "the guide to meditation and spirituality that he had first read as a teenager, then re-read in India and had read once a year ever since." Author's Biography Paramahansa Yogananda (5 January 1893 – 7 March 1952), born Mukunda Lal Ghosh was an Indian yogi and guru who introduced millions of westerners to the teachings of meditation and Kriya Yoga through his book, Autobiography of a Yogi. ABOUT VIVRE ENSEMBLE EDITIONS: Vivre Ensemble Editions are dedicated to offer you a comfortable and enjoyable reading of books on your e-reader. All our books are carefully designed, with a table of content.