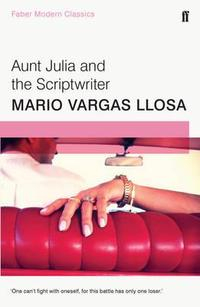 AUNT JULIA AND THE SCRIPTWRITER

Marito is a young Peruvian who toils away at his local radio station, dreaming of becoming a writer, before his life is torn apart by two arrivals. The first is his recently divorced Aunt Julia, with whom he begins an affair which he must hide from his family. The second is Pedro Camacho, an eccentric scriptwriter whose radio dramas are keeping the whole city enthralled. This hilarious and mischievous novel interweaves the story of Marito's life with Pedro Camacho's increasingly insane tales to masterfully depict both Peru and the act of growing up in the 1950s. Mario Vargas Llosa won the Nobel Prize in Literature in 2010, and Aunt Julia and the Scriptwriter is a perfect introduction to one of South America's most popular and lauded writers.