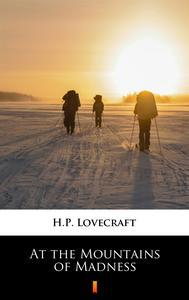 AT THE MOUNTAINS OF MADNESS

Lovecraft has proven that he is a master of descriptive writing that creates a sense of mystery, atmosphere, and dismay. On an expedition to Antarctica, Professor William Dyer and his colleagues discover the remains of ancient half-vegetable, half-animal life-forms. The extremely early date in the geological strata is surprising because of the highly-evolved features found in these previously unknown life-forms. Through a series of dark revelations, violent episodes, and misunderstandings, the group learns of Earth’s secret history and legacy. The author’s vivid depictions of the landscape of these Polar Regions pull the reader into a nightmare realm and leave the reader with a disturbing sense of loneliness and anticipation of what the explorers will encounter next.

0 reseñas sobre el libro AT THE MOUNTAINS OF MADNESS