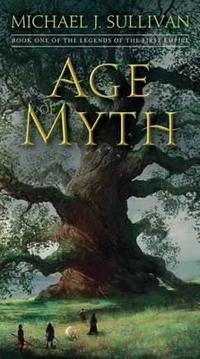 Michael J. Sullivan’s trailblazing career began with the breakout success of his Riyria series: full-bodied, spellbinding fantasy adventures whose imaginative scope and sympathetic characters won a devoted readership and comparisons to fantasy masters Brandon Sanderson, Scott Lynch, and J.R.R. Tolkien himself. Now Sullivan’s stunning hardcover debut, Age of Myth, inaugurates an original five-book series—and one of fantasy’s finest next-generation storytellers continues to break new ground. Since time immemorial, humans have worshipped the gods they call Fhrey, truly a race apart: invincible in battle, masters of magic, and seemingly immortal. But when a god falls to a human blade, the balance of power between humans and those they thought were gods changes forever. Now only a few stand between humankind and annihilation: Raithe, reluctant to embrace his destiny as the God Killer; Suri, a young seer burdened by signs of impending doom; and Persephone, who must overcome personal tragedy to lead her people. The Age of Myth is over. The time of rebellion has begun. Praise for Michael J. Sullivan “Hair-raising escapes, flashy sword fights, and faithful friendship complete the formula for good old-fashioned escapist fun.”—Publishers Weekly, on Theft of Swords “Filled with adventure and clever dialog and featuring a pair of not-quite-heroes whose loyalties to each other provide them with their greatest strength, this epic fantasy showcases the arrival of a master storyteller.”—Library Journal, on Theft of Swords “With less gore and a smaller cast of characters than George R. R. Martin’s Song of Ice and Fire but equally satisfying, Sullivan’s epic fantasy will be gaining fans at exponential rates.”—Library Journal, on The Rose and the Thorn From the Hardcover edition.