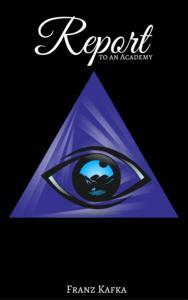 A REPORT TO AN ACADEMY

Sinopsis de A REPORT TO AN ACADEMY

The narrator, speaking before a scientific conference, describes his former life as an ape. His story begins in a West African jungle, in which a hunting expedition shoots and captures him. Caged on a ship for his voyage to Europe, he finds himself for the first time without the freedom to move as he will. Needing to escape from this situation, he studies the habits of the crew, and imitates them with surprising ease; he reports encountering particular difficulty only in learning to drink alcohol. Throughout the story, the narrator reiterates that he learned his human behavior not out of any desire to be human, but only to provide himself with a means of escape from his cage. Upon arriving in Europe, the ape realizes that he is faced with a choice between "the Zoological Garden or the Music Hall," and devotes himself to becoming human enough to become an able performer. He accomplishes this, with the help of many teachers, and reports to the academy that his transformation is so complete that he can no longer properly describe his emotions and experiences as an ape. In concluding, the ape expresses a degree of satisfaction with his lot.

0 reseñas sobre el libro A REPORT TO AN ACADEMY