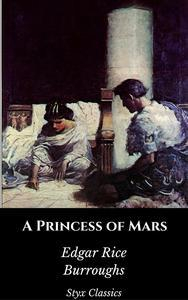 A PRINCESS OF MARS

Sinopsis de A PRINCESS OF MARS

A Princess of Mars is an Edgar Rice Burroughs science fiction novel, the first of his famous Barsoom series. It is also Burroughs' first novel, predating his Tarzan stories. He wrote it between July and September 28, 1911, going through four working titles; initially, he was going to call it My First Adventure on Mars, then The Green Martians, Dejah Thoris, Martian Princess, and finally Under the Moons of Mars.