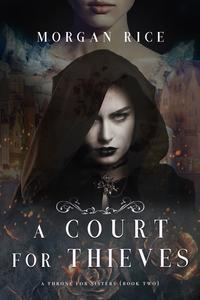 A COURT FOR THIEVES (A THRONE FOR SISTERS—BOOK TWO)

“Morgan Rice's imagination is limitless. In another series that promises to be as entertaining as the previous ones, A THRONE OF SISTERS presents us with the tale of two sisters (Sophia and Kate), orphans, fighting to survive in a cruel and demanding world of an orphanage. An instant success. I can hardly wait to put my hands on the second and third books!” --Books and Movie Reviews (Roberto Mattos) From #1 Bestseller Morgan Rice comes an unforgettable new fantasy series. In A COURT FOR THIEVES (A Throne for Sisters—Book Two), Sophia, 17, finds her world upside down as she is cast from the romantic world of aristocracy and back to the horrors of the orphanage. This time the nuns seem intent on killing her. Yet that doesn’t pain her as much as her broken heart. Will Sebastian realize his mistake and come back for her? Her younger sister Kate, 15, embarks on her training with the witch, coming of age under her auspices, mastering the sword, gaining more power than she ever imagined possible—and determined to embark on a quest to save her sister. She finds herself immersed in a world of violence and combat, of a magic she craves—and yet one that may consume her. A secret is revealed about Sophia and Kate’s lost parents, and all may not be what it seems for the sisters. Fate, indeed, may be turned on its head. A COURT FOR THIEVES (A Throne for Sisters—Book Two) is the second book in a dazzling new fantasy series rife with love, heartbreak, tragedy, action, adventure, magic, sorcery, dragons, fate and heart-pounding suspense. A page turner, it is filled with characters that will make you fall in love, and a world you will never forget. Book #3 in the series—A SONG FOR ORPHANS—will be released soon. “[A THRONE FOR SISTERS is a] powerful opener to a series [that] will produce a combination of feisty protagonists and challenging circumstances to thoroughly involve not just young adults, but adult fantasy fans who seek epic stories fueled by powerful friendships and adversaries.” --Midwest Book Review (Diane Donovan)